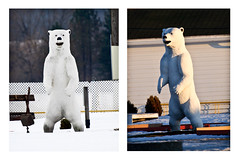 It’s been a while since I blogged, and this entry will be short, but important.

The quality and direction of light has a huge impact on the final product.

These photographs of the same polar bear look quite different.

Note the image looks quite two-dimensional, almost like a cardboard cutout.

The second photograph was taken in less cloudy conditions, at the end of the day with very directional light.

We are three dimensional creatures – we experience the world around us in three dimensions, however photographs are two dimensional. Adding shadows to our subject allows the viewer to identify the dimension and texture of the subject.

Light and shadow isn’t always a good thing; harsh shadows aren’t always flattering for human subjects, and usually a cloudy day, such as in the first photograph, would be more aesthetically pleasing on a person.

We can’t control natural light, but we can be aware of weather conditions and the type of light we can expect at different periods of the day.