This is more of a fun post than an informative one.

This is a video recorded with my Nikon D90 SLR camera. With the convergence of video and photography on cameras, this will become more and more prevalent.

They’re not the best video cameras, but the ability to use a high quality lenses (and choose different lenses) is certainly a plus. The ability to record High Definition (or nearly high definition) certainly makes it better than the analog video cameras we used years ago.

If you want to properly use an SLR as a video camera, I suggest you use a tripod, and don’t hand hold it like I did in this video. Do as I say, not as I do 🙂

1) For example, within Flickr there are communities, or “Groups”, that encourage you to post comments on other people’s pictures, and also put a link or image to tell people which group you saw the picture in.

This can be tedious to cut and paste HTML code into the comment section every time you comment on a picture. Sometimes people post comments on your photos, but they don’t say where they saw the photo (was it a group, or did they browse your photo stream directly?). It’s difficult to know which groups give you more attention.

2) Another issue I have is that when submitting a photo to multiple groups (e.g. the Nikon group, the Canadian photographers group, a Fashion group), it can be tedious because you have to add to them one at a time.

3) Another common complaint about Flickr is the white background. Some photos are best viewed on black or gray backgrounds.

To resolve these issues, I use the following tools.

1) For adding comments quickly, while displaying how I came to see the photo, I use Trailr. To use Trailr, you should use Firefox, and you will need to add Greasemonkey. Trailr will not only indicate which group you saw the photo in (automatically) when you post comments, it will also allow you to display the group’s logo and any links to the group. It also lets you invite photos you’ve seen to a group that the photo would be a good fit for.

2) To add a photo to multiple groups quickly, I’ve recently started using Multi Group Sender, a script that also best runs on Firefox with Greasemonkey installed. This lets you choose multiple groups at once to submit a photo to.

3) If I am posting a photo that I think will be best viewed on a black background, I will add a link to Big Huge Labs’ View on Black. Big Huge Labs also has a tonne of other Flickr utilities that you may find interesting. Check them out!

To view other people’s photos on a black background, I have just installed Background Color, another Greasemonkey script. It quickly allows you to “dim” the background to various shades of gray between white and black.

I am also starting to play with Flickroom, which is an application in Beta.

There’s also Fluidr and Flickriver, which allow you to browse interesting pictures in a never ending webpage.

Other Greasemonkey/Flickr scripts can be found here, although I haven’t tried them all.

Let me know if you have any other cool utilities for Flickr. 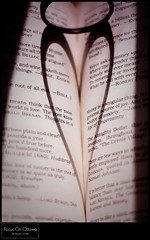 Just a friendly reminder that Valentine’s day is just around the corner. 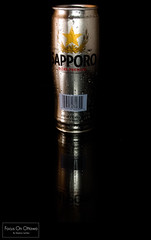 How to get this type of shot.

This was shot on a glass coffee table.

Next, tape black construction paper to the bottom of the glass, near the rear of the table.

Thirdly, prop a black background in behind. I used the black side of a circular reflector (the “gobo” side).

For the lighting, I used a ring flash, which is a circular flash that wraps around the lens. This is good for macro and product photography.

I also used a remote flash off to the left side.
I held a white reflector on the right side to fill in the shadows a bit (I actually used some paper towels, as they were handy).

Because I was holding the paper towels, I had the camera on a tripod and I set it to timer mode, so I had time to press the button, then hold up the white reflector.

For the beer can, I sprayed it with a water bottle to give it more beads of water.

After the “money shot” was verified, I enjoyed the beer.