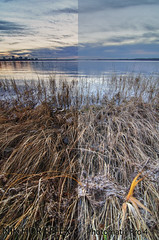 HDRSoft’s Photomatix Pro has been the undisputed leader for HDR processing for years. Now Nik Software, which produces amazing filters for Photoshop, has released HDR Efex. I am a Photomatix user, and recently gave the Color Efex demo a whirl. I also recently upgraded from Photomatix release 3 to release 4.

These two images were created with what I considered my favourite presets from each of the applications.
I definitely like the presets available in HDR Efex better than Photomatix (and there’s more of them).

I’m sure you can get a picture of similar quality (saturation, tone and contrast) in Photomatix as you can in HDR Efex using the sliders, but the bottom line is – which of the two improves your workflow?

Photomatix Pro has 12 presets to choose from. These are divided in 3 methods of HDR tone mapping: enhancer, compressor, and fusion. The ability to see previews of the presets is a new feature in version 4.

The Nik Color Efex has over 30 presets, which are more than just HDR settings, but add effects like gradients, vignetting, and tonal contrast. Since these are things that I will typically add post-Photomatix in my workflow, this is a significant workflow improvement.

One key difference between Photomatix version 3 and 4 is the addition of (semi) manual ghosting handling. What version 4 does is allow you to circle parts of the image that have ghosting problems, and it will focus on those components. Nik Color Efex has ghosting handling too, but it only offers automatic.

I haven’t put ghosting handling to the test in these versions, but this blog has a great comparison of the different versions and how they handle ghosting, and clearly Photomatix handles ghosting better.

When I shoot, I try to avoid situations that lead to ghosting (i.e. people walking, animals, wind blowing vegetation, etc), so fixing ghosting is usually a non-issue.

In my personal opinion, although I’ve only just started playing with the HDR Efex demo, and I’ve just only started using Photomatix version 4 (having recently upgraded from 3), I  prefer the output from HDR Efex. I’m not sure if I like the difference enough to warrant shelling out US$150, as I do own the less expensive and still very powerful Photomatix Pro, but it is tempting.