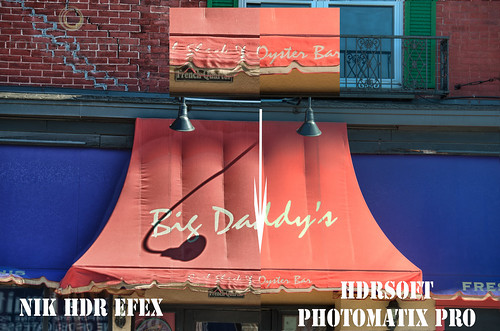 HDR Efex vs. Photomatix Revisited, a photo by Tukay Canuck on Flickr.

In my previous comparison of HDR Efex versus Photomatix, I indicated that I preferred the HDR Efex as it has a simpler and more effective workflow.

One area where Photomatix is clearly better is when there is movement in the image, which could cause “ghosting” in the HDR image.

As you can see, aside from different appearances based on settings used (which has no effect on the appearance of ghosting), the HDR efex version has some serious ghosting at the bottom of the verandah. (Not sure if that’s the technical term).

Although normally I prefer using HDR Efex for its simple workflow, there are situations such as when there is motion where Photomatix Pro excels.